6 Haunted Places In England You Would Never Want To Visit

We all dream of knowing a specific place, don’t we? Whether that place is a neighboring city or another country, it doesn’t matter. Therefore, many people live their lives in order to make the trip they so much desire. It is increasingly common to see someone working hard and saving money to leave at the first opportunity. Among the most common destinations in the world are the countries of North America, mainly the United States and Canada. Countries like Japan, China , France, Germany, Russia and, of course, England are also on the list and receive hundreds of thousands of tourists annually.

England, in particular, is full of cultural riches. Much of this is due to buildings that date back hundreds or thousands of years. Even in the most industrialized parts of the country, in places like London for example, you can’t get very far from these old buildings, which have some sort of historical relevance. However, as with many ancient places with stories in their bowels, it is inevitable that morbid events occur on certain occasions, leaving behind strange feelings of a supernatural character.

As such, countries with a rich history like England are bound to develop a reputation for haunted places . And with that in mind, we’ve brought you a list of haunted places in the country that you won’t want to visit. Check with us below and be surprised. 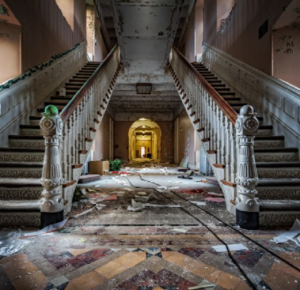 This has been an iconic monument in the city for over 900 years. The place was once occupied by several people, many who supposedly still haunt the tower to this day. There are stories that the ghost of Arbella Stuart has been roaming the place for a long time. However, the most famous haunting is that of Queen Anne Boleyn. After her arrest and decapitation in 1536, there are many witnesses reporting alleged sightings of her body.

This is cited by many as one of the most haunted castles in England and is located in Devon. The place is surrounded by rumors about sightings of two notorious ghosts: the Lady in White and the Lady in Blue. According to legend, the Lady in Blue draws guests to her tower. Meanwhile, the Lady in White haunts the dungeons of the place. Some English believe she is the ghost of Margaret Pomeroy, who was imprisoned forever in the residence by her jealous sister.

More than 400 years ago, this place served as the stage for what would become known as “the Pendle Witch Trials.” At that time, those accused of practicing witchcraft were sentenced to death there. Some visitors say that inside the castle they had the feeling that someone was pushing them back.

Many people believe that the ghosts of Henry VIII and his wives have haunted the corridors of this palace for a long time. Many reports have heard screams of Catherine Howard, alongside the ghostly apparitions of Jane Seymour.

Raynham Hall’s Lady in Brown is the name of the ghost who supposedly haunts the Norfolk country estate. The psychic’s identity is said to be Lady Dorothy Walpole. According to the story, her abusive husband, Charles Townshend, thought she was having an affair with another man, so he locked her in Raynham Hall until she died of smallpox. Since then, she would have haunted the place.

This mansion is in Nympsfield and had its construction stopped in the mid-1870s. Although it never had inhabitants, the place is known for paranormal experiences. The place is scary and empty, so it started attracting paranormal hunters to investigate the place. The Gloucestershire Paranormal Group claims they saw ghosts there in 2003 and 2005.